Interactive installation-mural entitled ‘Wirefull’, in the style of a ‘rolling ball’ of kinetic sculptures, by the ‘Karkatag’ art collective, will be placed on the façade of the Fabrika, and presented to the public at the ceremony of the gala opening of the Kaleidoscope of Culture.

The audience activates the façade with their participation, mutual communication and playfulness, always creating a different audio-visual animation of the building and the plateau.

Wirefull tries to combine the former main activity of the factory itself – wire production, with contemporary moment and long-term reuse of the location for artistic and cultural content by relying on the rich history of the place where it is located, with its material and concept.

Wirefull symbolically returns the work of people and machines to the factory with the sound and visual revival of the building, which now continues to take place in a new form.

Wirefull promotes analogy, direct communication and restores the impressiveness and vitality of large factory plants in contrast to modern wireless life habits, in terms of technology and human contact. 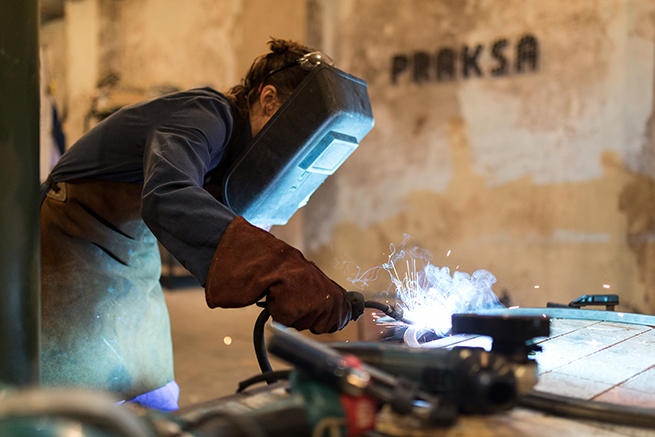 The counterpoint between the dynamics of ball movement meditatively introduces us to two completely different rhythms of life, in the period when the wire factory operated 100 years ago and nowadays.

The balls ascend to the highest point of the rollercoaster at a slow pace at the command of the audience to be randomly orchestrated, rushing in different paths and activating different light effects, using seemingly robust mechanical means.

The involvement of the ‘Karkatag’ art collective in shaping and aesthetic enrichment of the cultural district is of great importance for the process of returning artists and creators to the space of the former Great Liman.

In addition to the context of the installation, which draws a clear parallel with the industrial heritage, the work is interactive and directly invites the audience to discover all the spaces and contents of the neighbourhood in a timely manner.

Connection between Karkatag and independent cultural scene of Belgrade, Novi Sad and beyond, adds to the importance of approaching this target group to get involved in defining the future epicentre of cultural events in Novi Sad.

The artistic-production collective ‘Karkatag’ represents a unique group of independent architects, artists and theorists who, through their spatial installations and ephemeral architecture, depict the dynamics of life.