Industrial Heritage of the Great Liman as an Inspiration to Artists from St. Pölten
Skip to content

The four-day opening of the Kaleidoscope of Culture in Novi Sad will be marked by the unusual exhibition called ‘Matter through Time, Sand, Wood, Stone and Metal in the Age of Digitization’.

This location-specific exhibition and permanent performance will be presented by students and young artists from St. Pölten, under the mentorship of Professor Marcus Wintersberger, in partnership with the Art Gallery of St.Pölten – Landhausgalerie Ausstellungsbrucke.

Six artists will approach the space of the Creative District on the former Great Liman through six art installations. In Object 13 (Biro), experimenting with the materials that define this location – sand, wood, stone, metal, these artists will go through the gates of fiction, and reconstruct the idea from existing materials in relation to moving images, signs, texts and sounds in the form of digital traces. 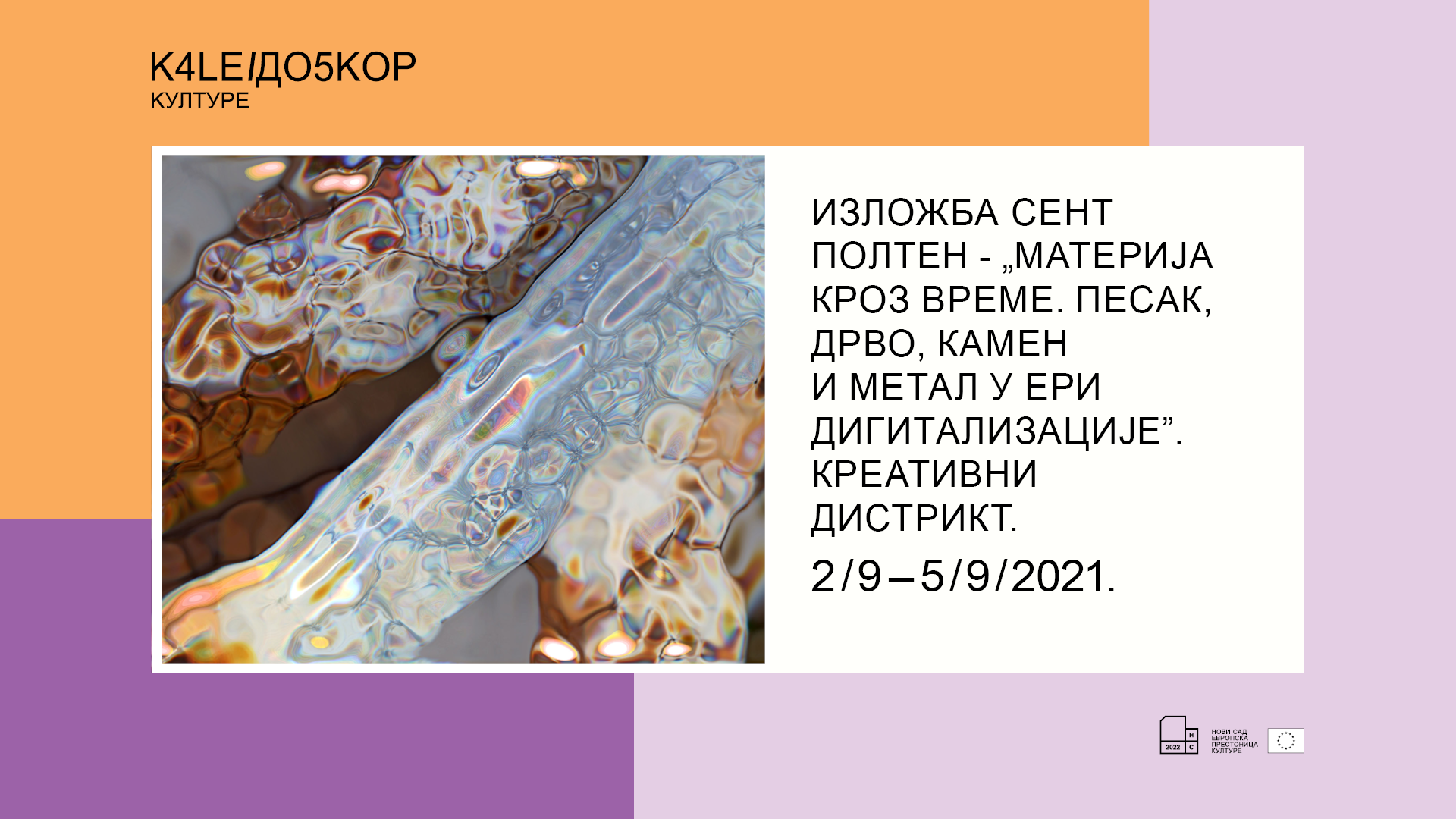 One of the six installations within the ‘Matter through Time, Sand, Wood, Stone and Metal in the Age of Digitization’ exhibition is the VR installation called ‘Unreal Things Fly through Space’, which opens a journey through the matter of time, into the memory fragments of a seemingly real place, a collectively archived space-time continuum. Through this installation by Janine Scheer-Erb and Catherine Spet, digital data becomes the only tangible medium to retrieve forgotten stories and hidden places. Like a network that is invisible but always there, the artwork leads into a narrative of digital associations and connections of an alien-familiar place, guided by a digital ‘I’ – a machine intelligence.

Christian Munk, an artist whose skills infiltrate generative art will mark the Creative District with two of his interactive installations. ‘Layers of Sandscapes’, interactive installation that creates an abstract composition between analogue and digital sandscapes. The granular material sand is mixed with moving shapes and forms of digital pixels, layered and arranged by the visitor. ‘Kinect Installation’ represents a user who is captured and transformed into his own memory loop that is fading out.

This loop is controlled by the users 3D outline and is mixed with material that was created during the project research. In the durational performance called ‘Intermoving Spaces’ the choreographer and dance teacher Andrea Nagl physically interacts with the materials stone, wood, metal and cables and thus inscribes herself into the found space. In a flowing process of exchange, a permanent change of the setting takes place, object, body and architecture merge into a moving image choreography.

‘Soft Shells’, a real-time installation by Thomas Wagensommerer, who describes it as a video game water park where you walk on water. ‘Can I dive into water that I don’t feel?’ – the artist asks, and promises the audience an extremely interesting psychological game.

Markus Wintersberger, artist and professor, collects information on the area of the former Great Liman, such as images, video, 3D data, text, sound, which represent the basic material for artistic procedure. As a visual archive, the collected digital information already forms a digital information pattern itself, revealing a network of memories in the form of tumbnail references: a concatenation of facts. The inherent principle of this work is a digital collage and montage process, an interpretation and association takes place on the basis of links. The overall picture is never apparent, is alienated as truth and thus holds great scope for interpretation. The physical world is built of matter, the virtual world only reflects its memory. The “Reconstructions” transfer the memory into a virtual moving image.

The ‘Matter through Time, Sand, Wood, Stone and Metal in the Age of Digitization’ exhibition is the result of cooperation between two cities – Novi Sad, European Capital of Culture 2022 , and St.Pölten, which is a candidate for this title in 2024. One of the results of this cooperation is the exchange of artists, so Serbian artists will also have the opportunity to exhibit in this important economic and cultural centre of Lower Austria.

Young artists from St.Pölten this time worked out the theme of industrial heritage and the Great Liman under the mentorship of Professor Marcus Wintersberger, while three Novi Sad artists – painter Sara Masnikosa with the project Outside, such a lonely place, visual artist Jelena Gajinović with the project Lost landscape, and visual artist Andrea Kovačević with the Collage Lab project, have the opportunity to exhibit at the aforementioned art gallery in St.Pölten.

The exhibition will be opened on 1 September, and the Austrian public will be able to see their works until 3 October. The three young artists will present the diversity in approach and the diversity of styles that the Academy of Arts in Novi Sad nurtures.

The four days of the opening ceremony in the Creative District, in the area of Great Liman, will be an overture to five weeks of Kaleidoscope of Culture, from 2 September until 8 October, during which, through five arts – architecture, literature, visual, applied and performing art, programmes will be presented throughout Novi Sad, giving visitors the opportunity to choose and create their own kaleidoscope of culture.

At the opening of the Kaleidoscope of Culture, the national pavilion of one of the most important European institutions for new media, Ars Elektronica from Linz, will be presented to the Novi Sad audience, where representatives of the Novi Sad Academy of Arts will exhibit. The audience will have a chance to enjoy the ‘Obnova’ Film Festival, performances within INFANT and numerous other events, which will be announced in the coming weeks.