This year, traditional Korzo, one of the key events of the Kaleidoscope of Culture, which has been giving its space – one of the central city boulevards in Novi Sad, to art and culture in the last two years, offers an online concert directly to your homes, adhering to the epidemiological situation.

Korzo will give its audience from across the world a concert of one of the world’s best piano duos – LP Duo, on the official website of Kaleidoscope of Culture and the Novi Sad 2021 YouTube channel, on Saturday, 12 September, at 8:22 p.m. It will set new standards for decentralisation of culture by moving from the former Novi Sad promenade, to the online world, thus creating new audiences.

Elegance of classic music, freedom of jazz and power of rock and roll are synonyms for music of Sonja Lončar and Andrija Pavlović, whose stage, particularly for the Kaleidoscope of Culture, was space near the famous clock at the Petrovaradin Fortress. With the view on Novi Sad behind them, Lončar and Pavlović performed a unique combination of avant-garde, electronic, film, theatre and pop music. 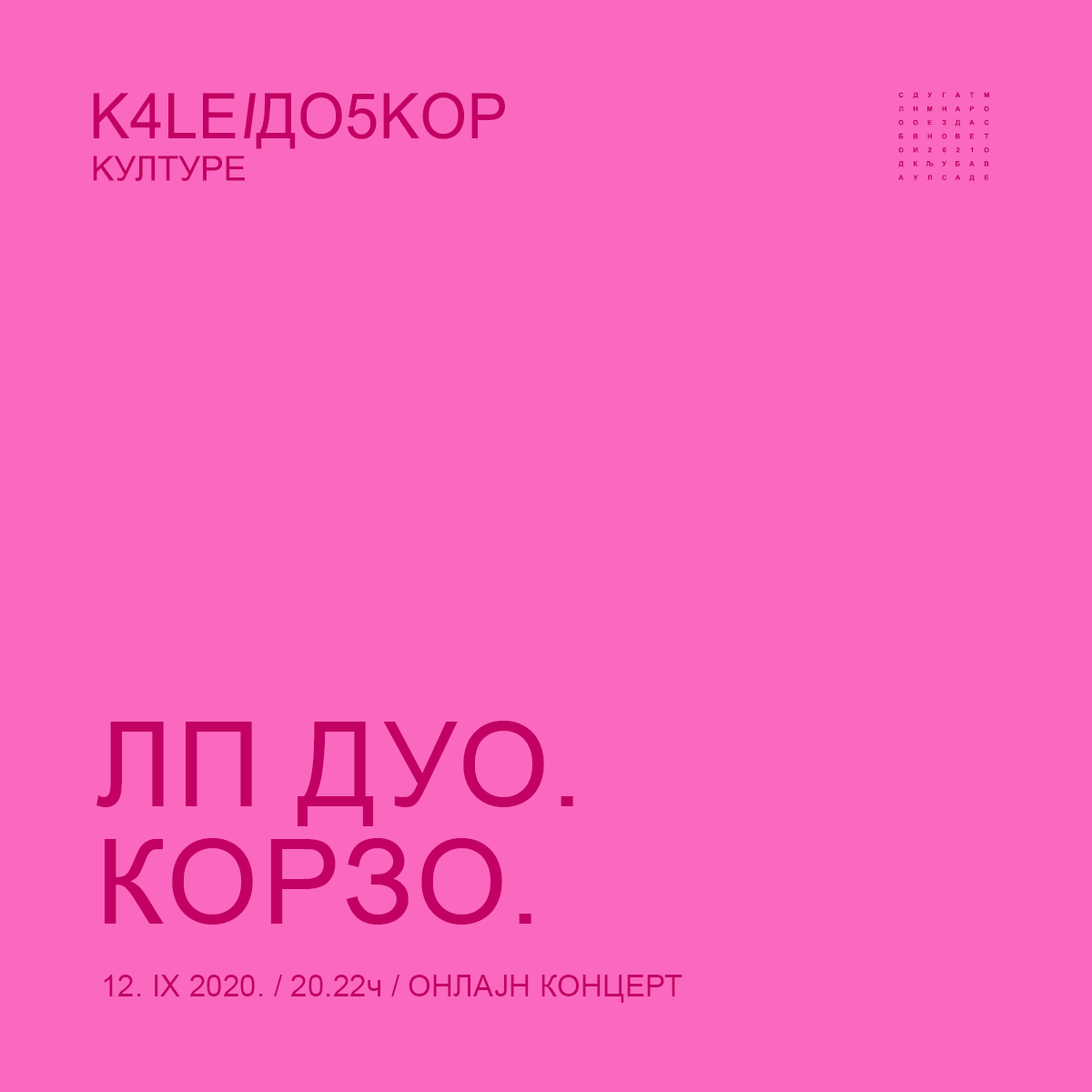 For the past 16 years, Sonja and Andrija have been active not only in the music field, but in the field of theatre and visual art as well. These talented musicians have numerous compositions for the plays of the Atelje 212 theatre, National Theatre, Yugoslav Drama Theatre, BITEF and other theatres. They also composed music for the Serbian tv series ‘Jutro će promeniti sve’, ‘Dug moru’ and ‘Žigosani u reketu’, and they have been proclaimed one of the world’s best piano duos at the world’s biggest competition in Miami.

In the performing art week, Youth Singer-Songwriter Festival, i.e. concert of the finalists, will be held in the Egység Cultural Station on 13 September at 8 p.m. Vojvodina Guitarists’ Association initiated the Youth Singer-Songwriter Festival with the idea of promoting young and emerging artists aged 16 to 26, mainly from Novi Sad. The festival includes four phases – the call, workshops, competition and finalists’ concert. This year, the selection jury consists of Marko Šelić Marčelo, Nina Romić, Olivera Popović, Nemanja Nešić and Slavko Matić.

While Egység is fostering young talents in the performing art week, Svilara is turning to cultural heritage and roots of the European baroque music within the ‘Days of Baroque Music in Novi Sad’ festival, which, besides the prominent musicians from Serbia, will present musicians from other countries too. The Musica Antiqua Neoplantensis ensemble will perform on Tuesday, 15 September at 8 p.m., introducing us to the German baroque music.

Masked Dance, Classic Music and Jazz, and Shakespeare as well

Within the second week of the Kaleidoscope of Culture, the Egység Cultural Station brings the fourth International festival of contemporary dance, Tanz Platz, on 17 and 18 September, in co-production with the Student Cultural Centre of Novi Sad. This year, they will present themselves along with four co-productions and artists from France, Norway and Czech Republic. This festival will include the Novi Sad premiere of inclusive, dance film ’Glance’ produced by ’Let’s…’ Group, as well as panel discussion ’Choreographed crisis: How Does One Dance in a Face Mask’.

Besides contemporary dance, Novi Sad Brass Quintet will perform in Egység on 14 September, on the occasion of marking their 10-year birthday anniversary. The quintet will perform on the third night of the Festival of chamber music, as its founding members.

Besides baroque music, the Svilara Cultural Station will offer its visitors high-quality jazz within the Serbian Jazz Festival on 17 September. A non-governmental organisation ‘Kovači kulture (Culture Makers)’ initiated the festival with development of local jazz scene and support of local artists as their main goal. This time, it will present Dragon’s Fuel from Novi Sad, Vocal Quartet Ming from Belgrade and Kornel Kurina trio from Kanjiža.

During the third Kaleidoscope of Culture, all perscribed epidemiological measures are being applied. The maximum number of allowed visitors is constantly being controlled, which, right now, is 500 people in the open. The visitors are obliged to wear face masks when attending events. The organisers ask people to adhere to the prescribed measures for their own sake and for the sake of others, and for better and more comfortable experience of cultural events.

The Kaleidoscope of Culture started on 4 September and will last until 9 October. After the four days of grand opening on the site of former Great Liman, which you can read about here, programmes are being held across Novi Sad.

You can find the timetable and detailed information about the programmes HERE.